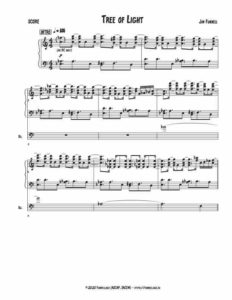 ◀️ Clicking on the image to the left will take you to a low resolution JPG file (1st page only). If you’d like to purchase complete sheet music (higher resolution PDF) for “Tree of Light,” please visit the Funnelljazz catalogue page.

“Tree of Light” has not yet officially been released as a single or on an album/EP. Enjoy the video below! 🔽

Tree of Light is one of the last compositions I completed in 2020 (hence the silver Christmas tree) and the very last one Akiko and I filmed and recorded from our apartment in Sunnyside (Queens, NY) before moving to Reykjavík (Iceland), where we are currently based. Two of the baddest cats originally hailing from the Seine-et-Marne French département, namely Dominique Muzeau and Thibault Perriard, joined us virtually in this transition, contributing amazing bass and drum parts from their homes in the Paris Region and lifting our spirits in the process. I’m sure they’ll lift yours too! Enjoy 🙂

New York City has been good to Akiko and I. We’ve certainly lived through a lot over these past four years. And now it’s time to move on. This month, AfuriKo moved to Reykjavik, Iceland!

To say goodbye to America, kick off the year, and celebrate the beginning of this new chapter, we played two sets from our home in Sunnyside on January 2, 2021 at 3PM and 8PM EST. If you missed them, you can replay them on YouTube. Just click on the videos below!

“Two short pieces for cable and electric piano” are a couple of spontaneous improvisations wrapped around the buzzing sound of an audio cable. The piece is in two parts:

While the piano parts are totally improvised, the cable parts were shaped using automation in Logic.

Back in 2019 (May through November) and then again more recently in July and August of 2020, AfuriKo had the pleasure to invite both Corey A. Wallace (on trombone) and Alex Busby Smith (electric bass) as guest artists as part of our monthly residency at Tomi Jazz (a Japanese bar & grill in Midtown Manhattan that features nightly live jazz). The shows in both trio formats were a blast, and Igneous Alloy, a composition of mine first recorded on Spirit of the Snail (2015), was one of the tunes we played almost every time. So we decided to record a quartet version of it (this time with both Alex and Corey featured on the same track!) to document these good times and make a little something available to those of you who weren’t able to make it out to Tomi’s. The arrangement was refined to suit this particular instrumentation, including trombone melodies, synth counterlines, and a new bass line/riff to support Akiko’s percussion solo. Our friend Laure Lang from the Hauts-de-France region added her grain of salt with a magical mix and crafty video editing. Enjoy!

💽 Support us by getting your digital track on Bandcamp 🙂 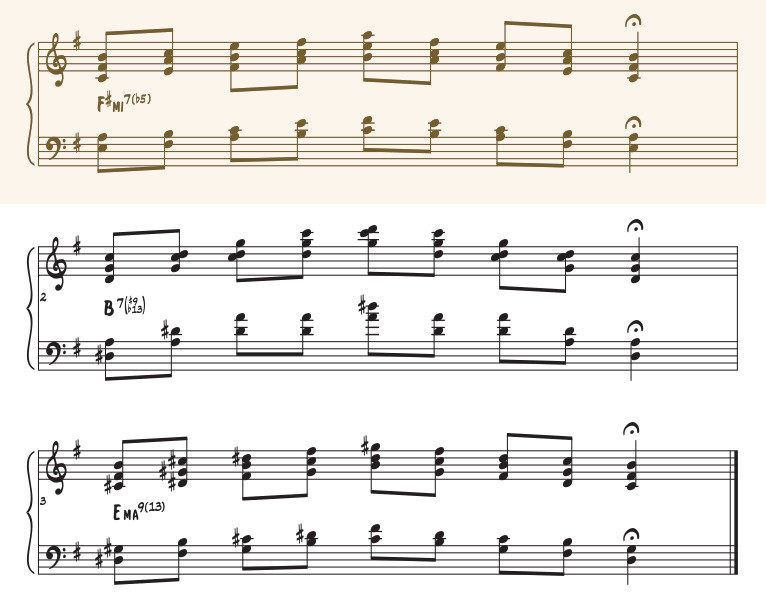 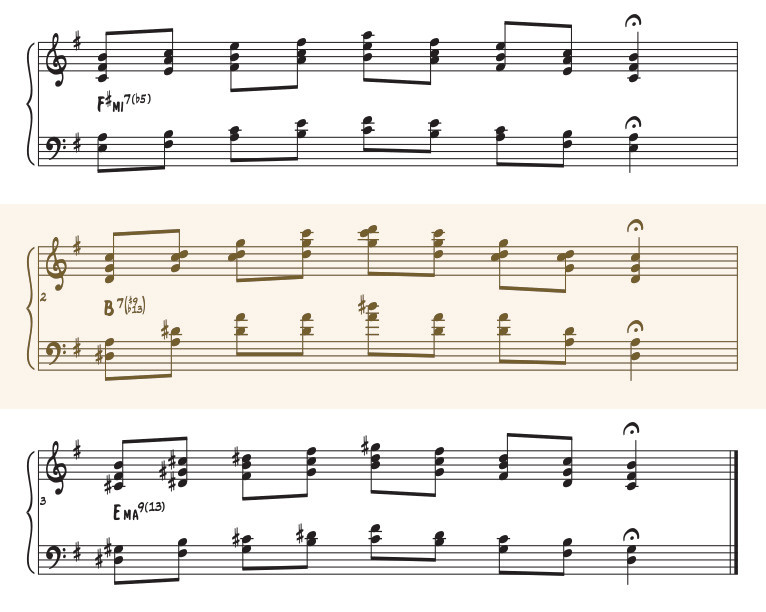 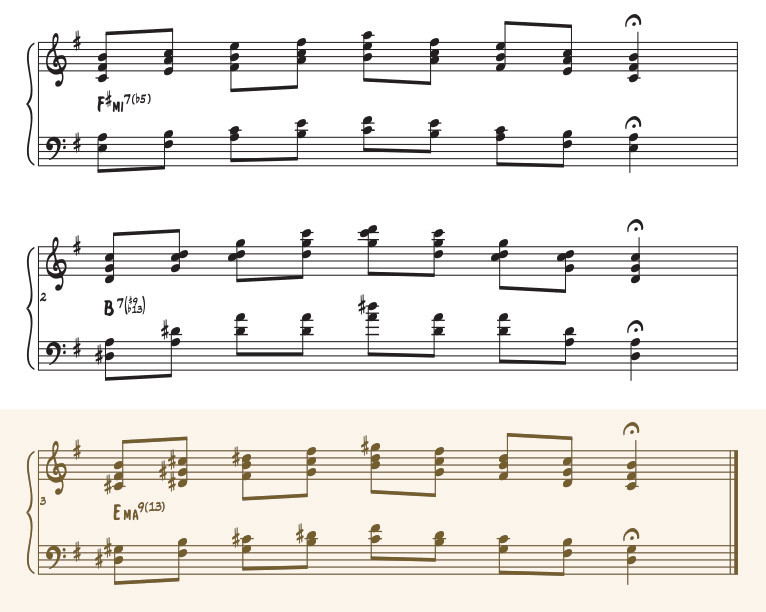 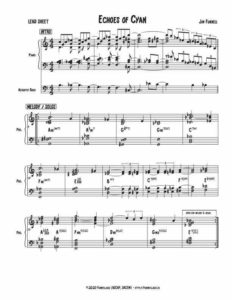 ◀️ Clicking on the image to the left will take you to a low resolution JPG file (1st page only). If you’d like to purchase complete sheet music (higher resolution PDF) for “Echoes of Cyan,” please visit the Funnelljazz catalogue page.

“Echoes of Cyan” has not yet officially been released as a single or on an album/EP. Please enjoy the video below! 🔽

Echoes of Cyan is kind of a tribute to the tune Blue in Green by Bill Evans (or Miles Davis?). The 15 bar form for this new composition is somewhat unusual, echoing Blue in Green’s 10 bars, and the (mostly) descending stepwise melody reminiscent of the famous ballad on Kind of Blue (1959). 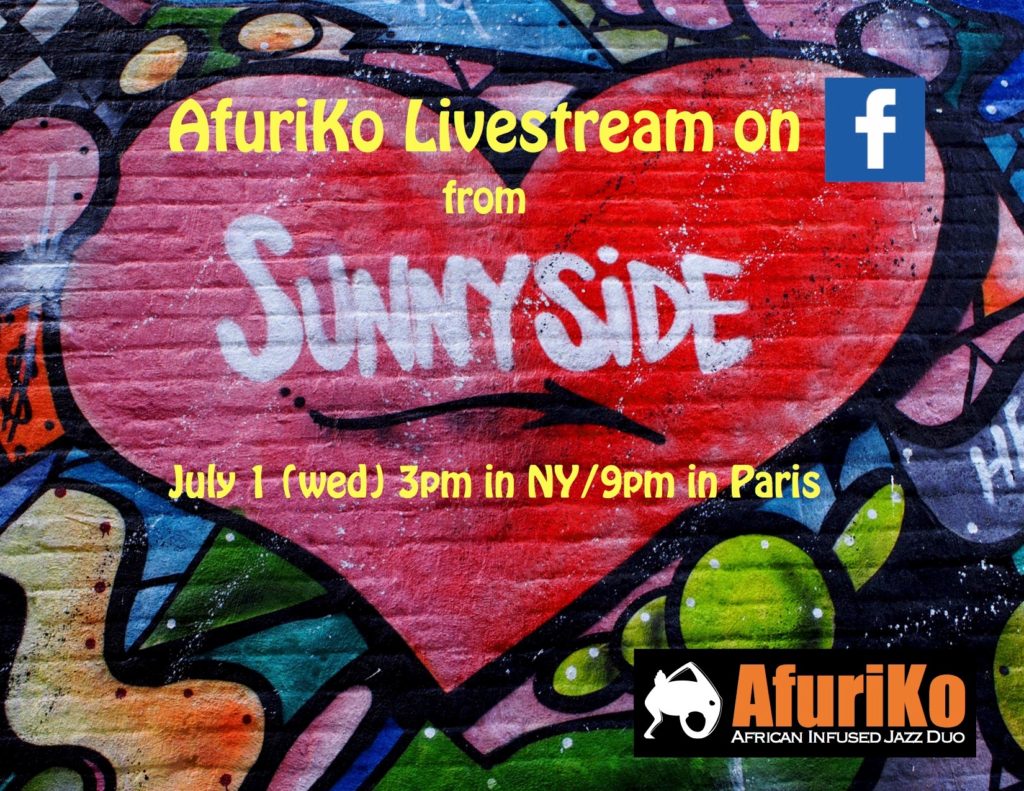 The track “Oleleko” from AfuriKo’s album Tao was featured on SoundCellar 2013, a Spotify playlist put together by the South West England venue for their 10-year anniversary. SoundCellar is “a haven for fans of non mainstream music in the atmospheric setting of the Blue Boar cellar bar in Poole, Dorset.” The playlist highlights bands and artists that have visited the venue during the year 2013. 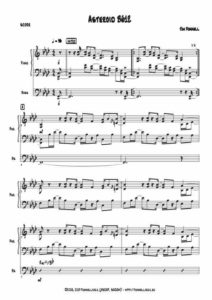 ◀️ Clicking on the image to the left will take you to a low resolution JPG file (1st page only). If you’d like to purchase complete sheet music (higher resolution PDF) for “Chakarera pa’ mi hermano,” please visit the Funnelljazz catalogue page.

A recording of “Chakarera pa’ mi hermano” has been released on On the Far Side (2014). Enjoy the audio/videos below! 🔽