Piano being a polyphonic instrument, pianists naturally have access to playing several notes on the keyboard at once, which is definitely an advantage when trying to develop harmonic consciousness. Guitarists also have a fretboard suited to playing and hearing both simple and complex chords, and vibraphonists, with two pairs of sticks, are often seen playing four notes at once — a perfect number if you’re focusing on chord tones only! But what about you melodic instrumentalists out there? How does a flute player, a trumpet player, or a double bass player go about hearing a tune’s harmonic framework?

Having taught a few people who play such melodic instruments (as opposed to pianists which typically make up the bulk of my students), I have found that going through a tune arpeggiating its chords is a worthwhile exercise. It gives the player a deeper awareness of the changes, which later enables him or her to be more connected to the tune when improvising (and when playing/embellishing the melody).

Arpeggiating is easily achieved for most chords: play the chord tones first (root, third, fifth, and seventh) then move up to the tensions (ninth, eleventh, and thirteenth)¹. Once you’ve reached the top, just make your way back down from the thirteenth to the root. That works really well for major and minor chords with ninths, elevenths, and thirteenths, and also for most dominant chords with tensions. But altered chords (a specific kind of dominant chord) can be a bit of a challenge because of the inner workings of the altered mode: it indeed appears to have two ninths (one flat and one sharp), and can be apprehended as having two fifths as well (a diminished and an augmented fifth). This can all be quite confusing… So let’s try and see through the fog so that you know what to play when you get to those last four bars of the tune Footprints for example².

If you look closely, you might notice that we seemingly have two different kinds of thirds in this mode: a minor third (D), and a major third (Eb or, spelled enharmonically, D#). Theoretically, D natural can also function as a #9 on a chord whose root is B. And since we cannot have two thirds in a given chordmode³, scale degrees 3 and #9 can logically be attributed to D# (Eb) and D respectively.

We have now identified three of our chord tones: the root (B), the major third (D#), and the minor seventh (A), which indeed outline a dominant seventh chord in skeletal form. It’s now time to add some flesh to those bare tones! Before moving on to tensions, we have to make a choice for our last chord tone: the fifth. We can either use a diminished fifth (the note F in our example) or an augmented fifth (G).

Altered arpeggio using b5 as a chord tone

If we decide that the b5 will function as the fifth of the altered chord for our purpose of arpeggiating it, we have the notes B, D#, F, and A in the lower part (chord tones) of the arpeggio. The remaining notes of the chordmode are C (b9), D (#9), and G (b13). They form the upper part (tensions) of the arpeggio. And we have:

Notice that the tensions (C, D, and G) form a quartal triad that can be notated C2, D7sus(omit 5), or Gsus depending on its inversion. In this case, there is an absence of eleventh in the chordmode due to the presence of b5.

If we decide that the #5 will function as the fifth of the altered chord for our purpose of arpeggiating it, we have the notes B, D#, G, and A in the lower part (chord tones) of the arpeggio. The remaining notes of the chordmode are C (b9), D (#9), and F (#11). They form the upper part (tensions) of the arpeggio. And we now have:

The tensions (C, D, and F) do not form any specific tertial nor quartal triad here, and in this second scenario, there is an absence of thirteenth in the chordmode due to the presence of #5.

So there you have it: two different ways of arpeggiating altered chords in full (i.e. entire chordmodes with four chord tones and three tensions). Don’t forget to practice both examples a) and b) in all twelve keys! As always, I recommend following cycle five root motion, starting at different points in the cycle every time you pick up your instrument to practice (I’ve started with B7alt in the audio examples above since this is the chord we’ve been concerned with throughout the article).

Finally, to further illustrate my point, allow me to offer a recording of Footprints for your consideration, wherein I used seven-note voicings extensively in the keyboard part (stacked thirds for the most part and the altered voicings discussed above for E7alt and A7alt in the 10th measure of each chorus). The track features soloists Corey Wallace (trombone) and Philippe Lopes De Sa (soprano saxophone), as well as a rhythm section comprised of Akiko Horii (percussion), Hiroshi Fukutomi (electric guitar), and myself (keyboard and keyboard bass). Enjoy!

¹ These kinds of voicings are often referred to as “stacked thirds” (Levine 2014:3)

³ A chordmode is an indivisible entity that arises when a given chord sounds in unity with the scale from which it derives. “The complete sound of a chord is its corresponding mode within its parent scale.” (Russell 2001) 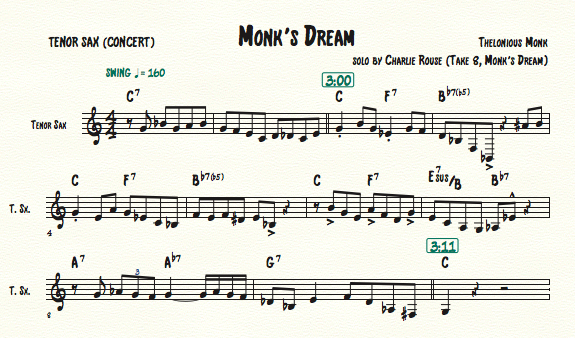