The excerpt above is a transcription of Herbie’s short solo on the A section, right before Wayne Shorter states two thirds of the closing melody, coming in on the bridge (B) and going into the final A and coda. The inspired introduction is another spot in this version where the piano is featured. Listen closely to the form throughout: A (9 measures), B (9 measures), A (9 measures). That’s three sections of nine measures each. Cool, unusual, and reminiscent of Nikola Tesla’s obsession with 3, 6, and 9 (numbers often seen as representing the non-physical realm). I’m guessing “Infant Eyes” is certainly a tune the genius inventor would have thoroughly enjoyed…

I recently stumbled upon an excellent article on Jazz Advice about jazz language. In short, it’s about the importance of learning it!

Jazz is indeed a language. When children learn a language, they listen, pick out their favorite words, and repeat what they hear… Over and over again! We jazz musicians can totally take example from these kids in order to improve our knowledge of – and fluency in – the language of jazz. Of course, the repeating part will involve transposing as well, and that’s where the fun really starts!

So I’ve decided to regularly transcribe some of my favorite solos, pick my favorite phrases, and share my findings with you on here. I hope you’ll enjoy them! Today, let’s start with Milt Jackson’s vibraphone solo on Anthropology.

It’s always nice to practice rhythm changes with its characteristic I-VI-II-V progression (in fact Ima7-V7alt/II-IImi7-V7(b9) in this particular case) since it’s such a common harmonic pattern in jazz. 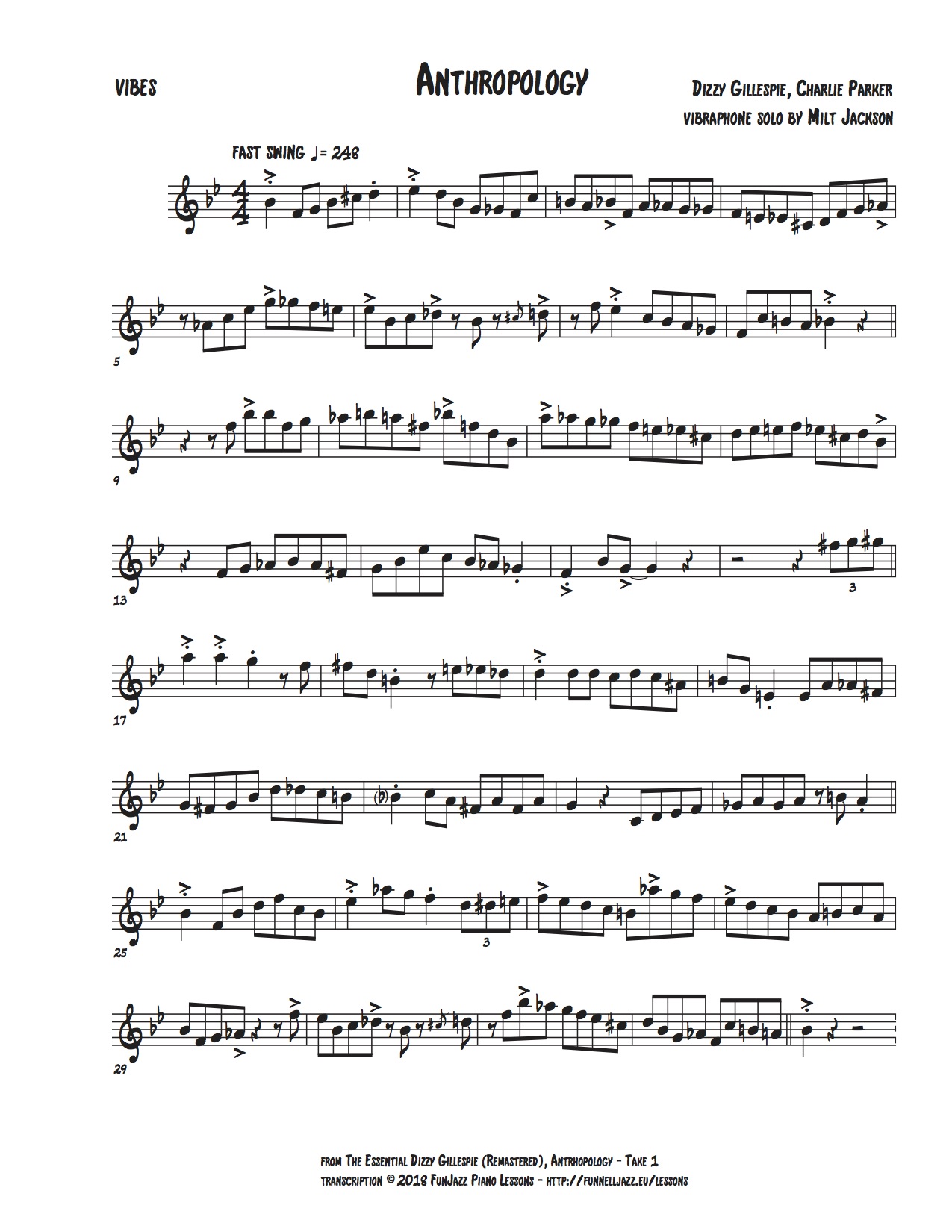 The one phrase that really stuck out for me is played in bars 9 to 12. I like it because it has some cool non-diatonic action in bar 10. Here’s how I practiced it both in my right and left hands, using two different kinds of voicings for the accompanying hand (“positions A and B” as Mark Levine puts it in his Jazz Piano Book). The example is in Bb major, the original key. As stated before, it’s essential to take it fully around the cycle of 5ths in order to make sure to really internalize the phrase and the chords in all keys. Just be mindful of low interval limits when playing the chords in the left hand. 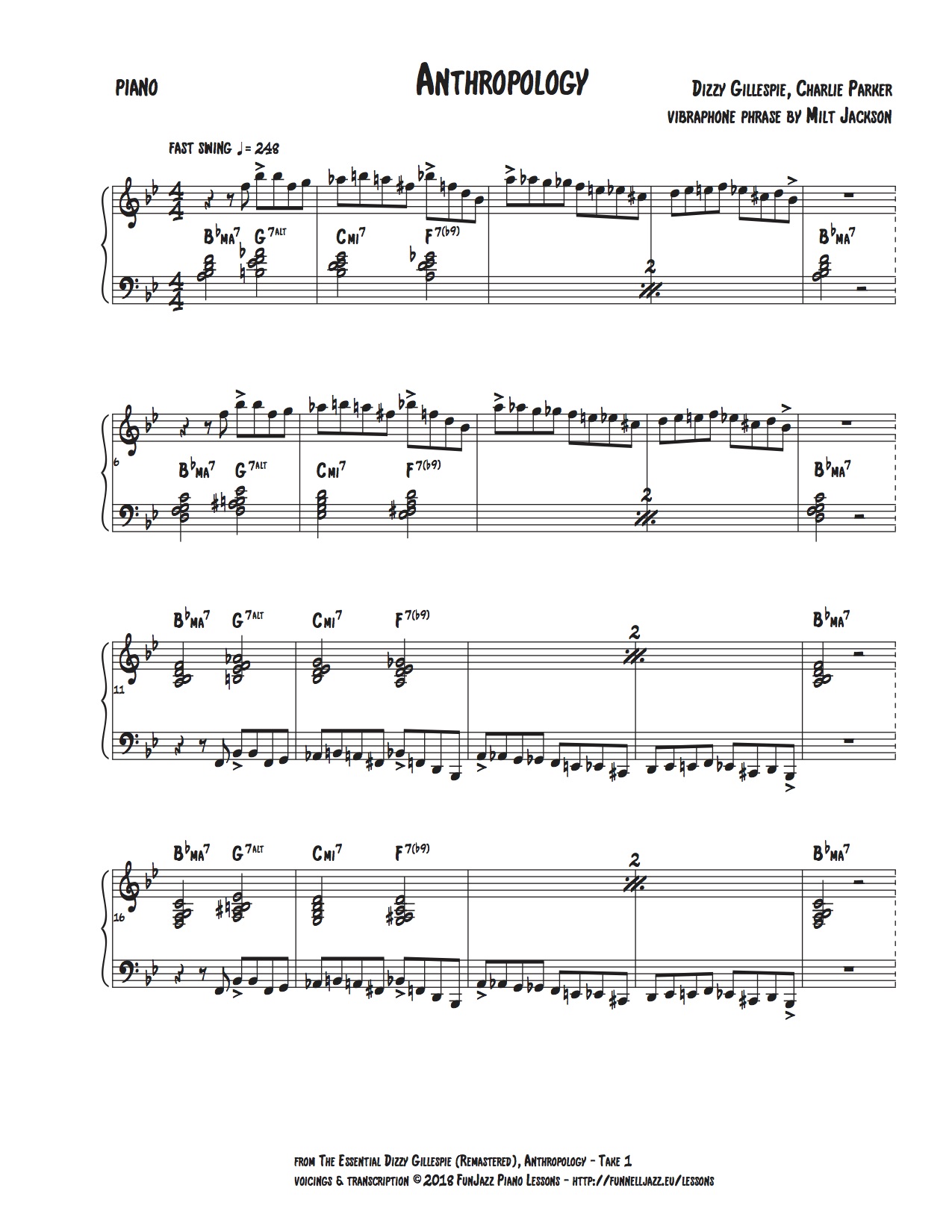 The use of anticipation in the second bar of Milt’s phrase is remarkable: the first four eighth notes (Ab B A F#) are all part of the half-whole scale based on F, which is the scale we would use over F7(b9). The second set of eighth notes (Bb F D Bb) is simply a descending triad outlining the upcoming Bbma7 sound in the third bar.

It’s also interesting to note that in one of the positions, the G7alt voicing can be thought of as Fmi7(b5)/G (bars 1 & 11). That means you can play a mi7(b5) chord a whole step below the root of any altered chord, and you’ve instantly got yourself a cool voicing for it!

Similarly, in the other position, the G7alt voicing resembles a Bma7(b5)/G (bars 6 & 16). So it’s also an option to play a ma7(b5) chord a major third above the root of any altered chord to get the desired altered sound.

Passages¹ where the major and minor blues scales are intertwined:

Based on this transcription, two distinct patterns, characteristic of Maceo Parker’s style, stand out when he intertwines the major blues scale with its minor counterpart:

In the first half of his solo, Maceo sets up the tone of his improvisation by shifting between the minor blues scale and the major blues scale, utilized as strictly separate entities. Beginning in bar 12, he gradually throws in more and more segments where both scales seamlessly intertwine. Between bars 19 and 23, he finally crafts a longer melodic sequence featuring both extensive chromaticism as well as diatonic ideas from Mixolydian, before wrapping up with a strong, effective major blues statement (bar 24).

Although Maceo’s rhythm, phrasing, and expression aren’t discussed in this post, they are also really hip and crucial to the powerful effect of his solo. Don’t neglect imitating these elements as accurately as possible on your instrument while practicing this transcription. Becoming familiar with the notes and scales is only half the work (at most)!

¹ Like in mathematics, the square brackets turned towards the inside (like this ” […] ” as opposed to this ” ]…[ ” ) indicate that the bar/beat numbers signaled within the brackets are included in the passage under consideration.

² The F# played on bar 17/beat 1 does not belong to either of the Bb blues scales. Rather, it is a lower chromatic approach of the following note G (itself scale degree 6 of the Bb major blues scale). This part (bar 17/beat 1) can be seen as an extension of the ascending chromatic motion initiated in bar 16/beat 3.

Need piano/keyboard tracks or a tailor-made arrangement to complete your piece of music? Click on the badge below to hire me on SoundBetter: